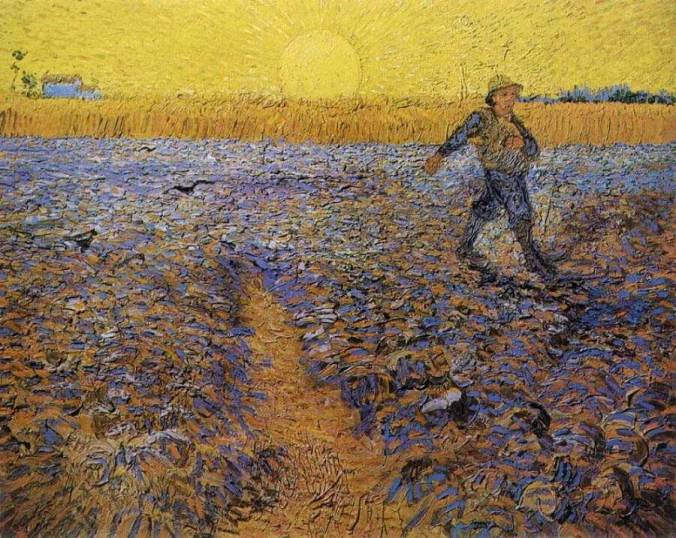 And Coach would just shrug and say, “Things you can’t control.” And that would be the end of it.

I often say that many of the greatest lessons that I learned in school were taught outside the classroom, on the field or the court. This is one of them.

I learned that I could not control the weather, the field conditions, or even the other team. I could not control what was in the past, either, or in the future, for that matter. Worrying about those things, in fact, would take my attention away from the things I could control, and would subsequently have a negative impact on my performance.

If you listened to the Gospel lesson, you may be wondering what all of this could possibly have to do with gardening. Well, maybe you are if you’re not a gardener.

Today we have the well known “parable of the sower.”

Today’s the day when preachers everywhere demonstrate that they are not great gardeners.

Because they think that soil can change its own quality.

If soil could have a change of heart, I would’ve been preaching to the soil in the front garden of the parsonage this whole time, and it would’ve gone from a sandy mess to compost out of a sense of guilt.

We often read this text and we think that we are meant to be the soil, and that our mission is to become good soil.

But I don’t think that’s what Jesus was going for at all. He’s God, after all, and he knows how gardening works.

No, Jesus is talking to the disciples as the sowers. He’s attempting to prepare them for an inevitability: that some people will immediately and readily become lifelong disciples. Others, not so much. Some people will not get it at all. Still others will get it, but then lose interest. And finally, some will become disciples, but will find that they just have other priorities, and being a disciple will get pushed aside.

You’d think that Jesus would then direct the disciples to look for people who will be good soil — to try to find those who will most readily receive the Gospel and become lifelong, productive disciples.

You’d think he’d tell them to be good gardeners, and careful with where they “throw seeds.”

But Jesus doesn’t play that way.

Instead, he calls for us to be somewhat careless sowers, preaching the Gospel everywhere and using words when necessary. And that is what we already do here. We make tasty food for people who need it. We take care of our own, and we take care of the community around us, in many different ways. In non-Covid times, we even sing hymns in bars. We serve folks on the street. And each of you spreads love in your respective jobs and families, as cool and varied as they are.

I’m not joking when I say that this is exactly the kind of church community that I would want to be a part of if I were not a pastor.

When I was first starting out as a pastor almost ten years ago, I would feel a rush of glee when someone would say to me, usually after meeting me, getting to know me, and then hearing what I do for a living: “Well, even I would go to church if you were the pastor!” I was sure that I was on track to become the next Nadia Bolz-Weber.

I figured out really quick that it wasn’t about me, and that most people who said that were listening to me through beer headphones (they’re like beer goggles, but for your ears), and that the people who did and do find their way to the churches I’ve served and stay there are exactly the right ones.

In short, I learned to let go of things I can’t control and focus on what I can.

This story that Jesus tells today is for us. Not us, the soil, but us, the sowers.

I’ve definitely told this story before, but I’ll tell it again because it always bears repeating: the Episcopal priest in town when I was in college was my very first clergy mentor. His name was, and is, Father Jeff. Before he was Father Jeff, he was just Jeff, and he served in the Marine corps back in the mid-1980s. The snipers, he told us once in a sermon, had a saying when it came to the enemy: “Kill ‘em all, and let God sort ‘em out.”

When he became Father Jeff, he said that his call changed when it came to his enemies. It became, “Love ‘em all, and let God sort ‘em out.”

Friends, this is true of us — and not just our enemies, but our friends and family. We do not get to control what type of soil anyone is. We are simply called to sow widely, almost irresponsibly — to spread God’s love wherever we go, not stopping to question whether or not someone is deserving or whether or not they might be inspired to come to church here. If they are, great! But that’s a thing we can’t control.

But luckily, we can’t control the Holy Spirit, either. And I believe that God is the best gardener. He decided to create humanity out of the soil of a garden, after all.

The Isaiah passage is where the Good News is this morning: God says, “For as the rain and the snow come down from heaven, and do not return there until they have watered the earth, making it bring forth and sprout, giving seed to the sower and bread to the eater, so shall my word be that goes out from my mouth; it shall not return to me empty.”

Do not spend time fretting about things you can’t control. The God who promises will deliver, whether we witness the growth or not.

Your job? Let go of what you can’t control and trust what God says.
You just love ‘em all. And let God sort ‘em out.

“For you shall go out in joy, and be led back in peace; the mountains and the hills before you shall burst into song, and all the trees of the field — [all the new life that God has made to grow in God’s own time] — shall clap their hands.”

Thanks be to God.