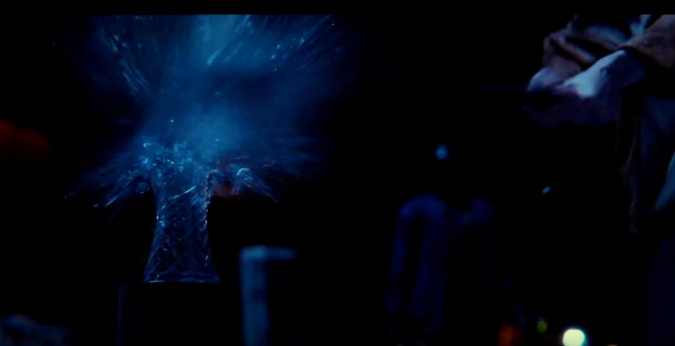 The character Adam breaks a glass vase in a junkyard in the Netflix series Sex Education.

Most of us have at least a few things we like to watch on Netflix. Unless I’m sick, I can never sit still long enough to binge watch anything, but one show I do enjoy watching is the Netflix series Sex Education. The series centers mostly around the life of Otis, the teenage son of a sex and relationship therapist in England. The series is mostly about Otis in the beginning, but as the series progresses, the viewer gets to know Otis’s friends and classmates too, as well as their struggles with relationships, family, money, and simply life.

Otis’s best friend in the series is another teenager named Eric. Eric is flashy and flamboyant and often loud and funny, but he’s also constantly bullied by another boy, Adam. Adam is the rough around the edges son of the overbearing and strict headmaster of the school.

Over the course of the first two seasons, Eric and Adam develop a complicated affection for one another. Adam has a painful and complicated home life, and nothing ever seems to go right for him, and Eric recognizes that. Still, Eric still fears Adam, who seems like a loose cannon, and Eric is never entirely sure exactly how to react to him.

One evening, Eric hears a tap at his window. He looks out and sees Adam, who beckons him downstairs. Adam is holding a baseball bat. He gestures over his shoulder and says, “Are you coming?” as he begins to walk down the road.

Eric sighs and says, “This is how I die,” even as he follows Adam down the road. Eventually, without speaking, the two reach a junk yard.

Adam says, “Do you want to see something cool?”

Eric is still visibly nervous as Adam picks up a glass bottle from the ground and places it higher on a stack of junk so that it’s about chest high. Adam then pulls out a pair of safety glasses and puts them on, pulls the baseball bat back, and smashes the bottle to smithereens. He raises the goggles and looks at Eric.

The two then proceed to spend the evening smashing just about anything in the junkyard that can be smashed, in a rush of catharsis. Over the course of the series, Eric will show others this fun activity, and the other characters will find their way to the junk yard too, smashing anything they can find that’s breakable among the trash in order to relieve some of the angst and anxiety of being alive.

To the characters, and to many people, there’s just something about breaking things more fragile than themselves that they find incredibly freeing.

It makes sense. We are all fragile. We all break. We don’t like to admit it, but we do all break, eventually.

We also like to make our fragility age-related, but it really isn’t. Yes, we do get more fragile as we age, but anyone who has ever worked in medicine knows that it is all human bodies that are fragile, not just the chronologically gifted ones. So much can go wrong, and none of us really knows how long we have. We are prone to breakage. If you notice that one of my eyes is a little bloodshot, it’s because a random blood vessel in my eye broke last week for no discernible reason. It was innocuous, but such random breakage can also happen in ways that aren’t so harmless, too.

I didn’t mean to have a sermon illustration happen on my face, but what can I say? Things happen.

Even if our bodies remain strong, our minds and our emotions can break, too. We are all so very fragile, and that is the primary message of Ash Wednesday: our mortality.

By my count, this is my ninth Ash Wednesday after seminary of ash-ing people and telling them that they are going to die in the traditional way: “from dust you came, and to dust you shall return.” Nine Ash Wednesdays, four different communities, and countless foreheads. Sure, I got the opportunity to apply ashes to foreheads in seminary, but it’s different when you become a pastoral presence rather than a student.

I’ve applied ashes to foreheads over communion rails and over ventilator tubes, to the brows of ninety-year-olds and to the brows of babies in their parents’ arms. By now, in two communities, I’ve presided at the funerals of people whose brows I once applied ash to. I’ve told them, “Remember that you are dust, and to dust you shall return,” then said over their graves the same old words from Genesis, “Ashes to ashes, dust to dust.”

I’ve never admitted this in any of my Ash Wednesday sermons and maybe I should’ve waited until the tenth, because it’s a nice round number, but it felt right this year, on my fifth Ash Wednesday in this community. We’ve been together for over four years now, so I feel like I can talk frankly to you. So here it is: while I consider the imposition of the ashes a privilege, I don’t love doing it.

It at least should be easy to see why, if you understand what my job is today. A lot like most of you, I don’t like admitting that death is a reality, much less reminding someone else of it. And yet, while most of you had normal days at work today, mine work today is to apply ashes to your brows and remind you of your mortality. Personally, I would prefer to safely think of you all as immortal because I cannot stand the idea of losing any one of you. And on most every other day of the year, I kind of can think of you all that way. But not today.

We are all so fragile, really.

Tonight, we begin a journey. The worship committee and I noticed when we began to look at this season that the readings for this particular year are full of people who are traveling — some literally, some figuratively — and God meets them on the way. And so we, together, are going to think about our own literal and figurative journeys, and that is why you see the suitcases and license plates around you.

Travel makes us vulnerable, too. When you are on the way to somewhere, away from the comforts of home, you’re even more fragile and vulnerable than usual, whether you’re in a car, or walking, or on a plane.

And so we begin this Lenten journey like we always do: by admitting our collective mortality. None of us is really any closer to death than anyone else. We are all fragile and vulnerable, regardless of age, race, sexual orientation, gender, political affiliation, or anything else. In this age of division, our mortality is one thing that unites us. None of us knows how long we have, so we’d better love hard and look up on this journey called life.

In the end, this day isn’t just about cherishing every moment, or being useful in this life, though that’s part of it. But you don’t have to be religious to know that we’re mortal and that we need to be intentional about using our “one wild and precious life,” as Mary Oliver eloquently put it. Everyone who is not stuck in denial knows that life is short and that we must make the most of the time we have.

But you are here. In church. On Ash Wednesday. And in a few minutes I have to remind you that you will die, and then Gail as the assisting minister has to remind me of the same thing, because our fragility is what we share in common regardless of ordination or occupation.

But then. Then we go to the table, and our mortal bodies are fed by Christ, our one hope of resurrection. Everyone can be fed here because we are all saints, all sinners, all fragile, all beloved. And in this we have the hope of “the resurrection of the body and the life everlasting.”

As soon as we love someone, we begin to have this sneaking, terrifying fear of losing them. And death is the ultimate way that we lose people, the greatest fear we all have.

Within these walls, death never has the final say. Within this church family, we acknowledge the reality of human fragility and death while never letting it have the last word. Within these walls and within this community, we believe and know that resurrection will come as surely as springtime.

The 2020 council is already reading a book called Accidental Saints by Nadia Bolz-Weber, and in that book, she proclaims the Gospel of this day, and that’s where I’m going to end so that we can carry on with the service. Hear this Gospel:

“If our lives are one long piece of fabric with our baptism on one end and our funeral on another, and we don’t know the distance between the two, then Ash Wednesday is a time when that fabric is pinched in the middle and the ends are held up so that our baptism in the past and our funeral in the future [can] meet [and be seen together].

And in that meeting, we are reminded of promises: that we are God’s, [and ultimately], that there is no sin, no darkness, and yes, no grave that God will not come to find us in and love us back to life.”

Yes, we are fragile. Yes, we will die.

And yes, my beloved, in this life and the next, we will always be loved back to life. So let us begin the journey. Amen.