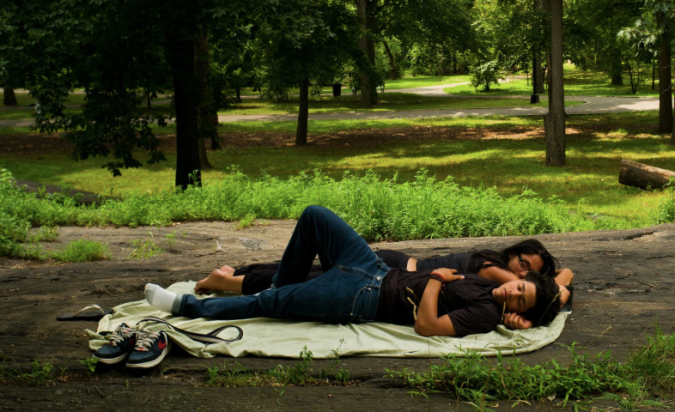 In the midst of the heat wave we’re in, as we all try to hide anywhere that has air conditioning, it occurs to me that in this Gospel story, maybe Mary was just hot. I think the lesson she gives us still remains, and maybe this heat wave we’re in just reinforces it. Here we go.

In this story, Mary wasn’t doing anything. And she’s told by the Savior of the world that she has chosen the right thing.

About a month ago, the New York Times ran an article that I instinctively, as an American of working age, found scandalous.

No, it wasn’t about politics, exactly. It wasn’t about the minimum wage or immigration. It was entitled — brace yourselves, American capitalists — it was called, “You are Doing Something Important When You Aren’t Doing Anything.” (1)

It detailed what the author called “fallow time,” noting that even the fields that produce our food must be left fallow in order to continue to do what they are supposed to do. In our over-value of work, we forget that we are human. We forget that sometimes, we all have to be off, resting, not doing anything.

What’s more, though, we are also terrified of what might happen when we stop moving. What will our worth be, if we don’t have somewhere to be or to go every second of the day? More, how will we be able to stand it if we are left with our thoughts? This is why vacations or lapses in employment or even parental or other family leave can drive us crazy. We often don’t know what to do when we’re not working.

Part of that is practical: we were created to have purpose, and there’s certainly nothing wrong with wanting one. But I still think part of our discomfort with fallow time is also a problem.

A comedian once remarked that texting and driving may be illegal just about everywhere now, but if you look around at a stop light, most people are looking at their phones. We’re not looking at their phones because we’re that important or because we can’t stand to miss something, but often because we cannot, and will not, be alone with our thoughts. And before anyone claims superiority because you’re not that attached to your smartphone or because you don’t have a smartphone, I bet you have your own pet distractions that keep you away from your thoughts, too. We all do. We always have, long before the internet.

The New York Times article that I mentioned gets at that, but what’s more, it notes that allowing ourselves to rest, especially in the summer time, makes us better humans. It’s almost like the ancient wisdom of the Hebrew Bible was onto something when God commanded Israel to work six days but have one day, one non-negotiable day, of rest.

It’s like that story where a pastor says that the devil doesn’t take a day off and neither does he. Gently, a friend recommended that this pastor choose a better role model. You know, like God, who built the world in six days and took one day of rest, not because God was weak or tired, but so that God could sit back, pay attention,  and take it all in.

Even God lies fallow. Even God rests. Even God has times of doing nothing.

Jesus recognizes this about Mary in our Gospel story for today. A lot of the time when we hear this story preached, we hear this sermon: we need Marys and Marthas! Both are valid!

And you know, there’s some measure of truth to that: we do need practical people who put in work. As a habitual Martha type, I would never deny that.

But that’s the thing. Luke nor Jesus never said that Mary doesn’t put in work. The idea that Martha is the worker and Mary is the one who doesn’t work sells Mary short; no one ever said she was lazy. Quite the opposite, actually. She’s smart enough to know when to stop moving.

Mary, you see, just realizes what’s right in front of her, parks in front of Jesus, and pays attention.

Martha, for her part, is angry at her sister for a few reasons. One, she feels like the burden of hosting is all on her. You can’t blame her, really. It’s not like today when we could simply say “The Messiah is here, so let’s order a pizza instead of making someone cook.” Someone had to feed them all, we think, and Martha agrees. She’s mad that her sister isn’t helping. Her sister, in fact, is acting like a man, reclining at the feet of a rabbi talking about faith while the woman works.

So is it true that Martha had to feed them all?

This is where it pays to get out an actual Bible and see where this story falls in the whole narrative of Luke. It turns out that, just one chapter earlier, the crowds had come pressing in on Jesus after hearing about him, and he taught them and healed them. Then sunset had rolled around, and the disciples, like Martha, started thinking practically: “Send the crowd away,” they said, “so that they may go into the surrounding villages and countryside and …[get something to eat]” (Luke 9:12).

If you’ve been doing the church thing very long, you probably know how a setup like that ends with Jesus. With five loaves and two fish, he feeds five thousand men — plus the women and children who don’t get counted. Jesus feeds at least five thousand, but as many as ten thousand plus humans with practically nothing. And here’s Martha scurrying around the kitchen, fretting about feeding around fifteen people.

Now, it is fair to ask if Martha and Mary knew about this miracle.

I think so. Luke talks over and over about how word spread to all the surrounding villages. Chances are, the disciples were still talking about it. We would be.

What Mary knew is that, like the article title says, “You are doing something important when you aren’t doing anything.”

Our society, writ large, tells us that rest is for the weak. We even tell children that idle hands are the devil’s playground, and while I don’t have children, I have been a child (and a teenager), and I know that there’s some truth to that statement. But we also shouldn’t confuse motion with progress or teach children to do the same.

This is what I’ve learned in my years of being an athlete: worthwhile work, at the right time, means everything. It is where progress is made and gains are huge. But athletes who never take days off will suffer setbacks and injuries of all kinds, because bodies (and minds) need recovery.

Sometimes I’ve made the best progress for myself when I wasn’t in motion at all.

So let’s take a little lesson from Mary and stop excusing Martha. While Martha’s intentions were pure and wonderful and practical, she missed something, and Jesus called her on it: it is Jesus who feeds us. And we should stop moving and pay attention to what’s around us.

At this table, we are all fed. If you believe that the Eucharist is more than a snack, you know that it’s not me and it’s not the altar care folks or the servers doing the feeding. It’s Jesus. Here, all are welcome, and all are fed, and there’s nothing you should do, and nothing you can do, to earn it. So come and be fed. And when you leave this place, leave to pay attention and maybe even stop moving for awhile and rest. Lie on the couch and watch the daylight. Sit under some air conditioning and drink something cold. Hang around your house. Notice things you haven’t noticed before, even if you’ve lived there for years. Read a book. Binge watch something. Start a project not because it’s productive, but because it’s fun. Do things not because you must but because you may. Because your heart wants to.

As much as your life allows, dare yourself to rest, however you can.

The New York Times article I mentioned ends like this, and I’ll end with this passage from it:

“I don’t mean for fallow time to be seen as just another life hack, the way that even meditation has been hijacked as something that will boost your productivity. The upside of this kind of downtime is more holistic than that — it’s working toward a larger ecology of workers who are recognized as human beings instead of automatons. Not everyone, of course, can leave the assembly line at will. But fallow time can take different forms for everyone, and finding a bit of [rest] is surprisingly reachable in most … lives….

A friend had excellent advice. Be open to the invitation to replenish yourself, he said. Say yes to the gift of no requirement.

It looks like I’m doing nothing. But it’s the hidden something I’m after.”

It’s the hidden something that Mary was after, and Jesus recognized that.

Go and do likewise. “Say yes to the gift of no requirement.” It starts here, at this table, and it ends with you, resting happily, not because you must, but because you may. Amen.