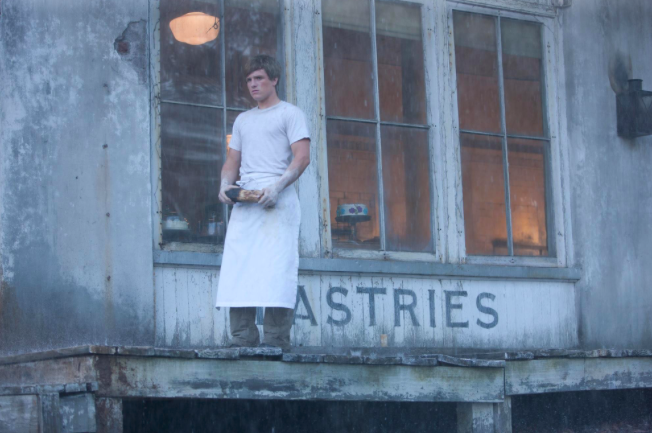 At first, she only knew him as “the boy with the bread.”

In the fictional dystopian book and movie series The Hunger Games, Katniss Everdeen is a teenager in Panem, an authoritarian nation far in the future which exists where the United States used to be. There was a rebellion once, years ago, and the rebelling District, District Thirteen (likely found, fans say, in the northeast), was said to have been obliterated.

Katniss and Peeta, the boy with the bread, live in the Appalachian Mountains, in District Twelve.  District Twelve is the poorest of the Twelve Districts in Panem. There is very unequal wealth distribution in Panem, with the Capitol and its citizens holding most of the wealth and living lavishly, followed by the district which primarily produces military equipment and other tools for the Capitol, followed by other districts which have thriving industries, followed finally by those who specialize in less thriving industries.

District Twelve, where Katniss lives, produces only coal. Its strongest residents struggle in the mines, while the others struggle for food. Katniss’s family is particularly poor after her father’s death in the mines.

One night just after her father had died, young Katniss found herself next to a pig pen as the searched frantically for food to for her mother and younger sister. Just then she hears an uproar as Peeta, another teenager, walks out of his parents’ struggling bakery. His mother is yelling at him for burning bread, which he must now throw into the pigpen just outside the bakery.
Spotting Katniss in her desperation, however, he checks to make sure his mother isn’t watching and throws the bread to her instead, allowing she, her mother, and her younger sister to eat, at least for that night.

That is how Katniss came to know Peeta as the Boy with the Bread.

Years later, the two will love one another. Years later, they will join in a second rebellion — the subject of the final two books. Also years after he became the Boy with the Bread, the oppressive regime of Panem will capture and torture Peeta physically and psychologically. Part of the psychological torture will be to get him confused about what is real. He will be brainwashed into believing that his friends are his enemies, and that Katniss, whom he once knew and loved, wants to kill him. Once Peeta is rescued, for the rest of the books and the movies, the Boy with the Bread will play a game called “real or not real” with Katniss to help him remember what his reality really is.

Peeta, the Boy with the Bread, nourished Katniss with bread when she was starving, and years later, she will nourish his tortured mind with truth.

This week in our reality, Facebook identified an active political influence campaign that had created at least 32 pages and inauthentic accounts on Facebook and Instagram that had been created to further divisions between political factions in America. We realized once again what digital natives already knew: you can’t trust anyone on the Internet to be who they say they are. That just because something is on the internet doesn’t mean it’s true or authentic.

Conspiracy theories flood all of our timelines. None of us likes to think of ourselves as prone to falling for conspiracies, of course; only dumb people do that. And yet, how have we all occasionally shared, in person or online, things that rile us up that we haven’t checked out for ourselves? We keep realizing, again, what digital natives already knew: strong words paired with photos don’t make truth, like the “Abraham Lincoln” quote paired with his portrait that says, “You can’t trust everything you read on the Internet.”

Conspiracy theories get us because, while none of us wants to be fooled, we all want to be the heroes of our story; we all want to be smart enough to find truth that no one else has figured out yet. That leads us to constantly playing the game:

Honestly, I think we fall for conspiracy theories the same way we fall for fad diets. We’re willing to do anything to be the heroes of the story, to figure out the real truth, as long as it doesn’t involve a healthy media diet and expending actual intellectual energy. We’d prefer to take a pill and get thin, or learn the one key that’s been hidden from us to figure out everything that’s wrong with the country and the world.

The twenty first century is one big game of “real or not real.” But you know what? This is not new. It’s just online now. Ever since humans invented language, we have been using different vocabularies for the same concepts and the same words for different concepts and then used such misunderstandings to try to manipulate one another into believing things.

Having different definitions of the same words is at the root of a lot of division and manipulation and conspiracy theories and misunderstanding. And that’s where we find Jesus and the crowds today.

When we last left Jesus, he had just pulled off a miracle even for an experienced caterer: feeding 5,000 people at once. The ancient near east was (and is) big on hospitality and making sure your guests have enough to eat; Jesus, never one to be a bad host, provides more than enough for his guests. The crowds are so won over that they don’t just want to encourage him to be their leader; they want to force him to be king. The crowd is so won over that they essentially say, “cancel your plans for the rest of your life; you’re our king now.”

But the ever-wily Jesus slips out of their grasp. Ever notice how Jesus always does that? He can never quite be owned by anyone, so it’s funny how often we Christians try to claim that he agrees with us on everything.

Then, after a little classic walking on the water episode, the crowds have finally gotten wiser and located the missing Jesus. They approach him on the shore and say, literally, “How did you get here?”

Then the crowds and Jesus embark on a conversation that can be summed up thus: the bread of life — real or not real?

Are you talking literal bread, or is this some kind of metaphor?

Jesus chides the crowds almost immediately that they’ve only come looking for what they see as “real” bread, literal bread. They go back and forth for awhile, as Gail O’Day, my own John teacher, says: “using the same vocabulary but speaking in different languages…. Jesus keeps trying to speak to the crowd in the cadences of grace” — that the work of God is actually God’s work, not ours — but “the crowd … turn[s] the language of grace into the language of contingency and demand.”

Jesus promises them the bread of life, but they say in return, “wait. Real bread or not real bread? If it’s real bread, what do we have to do to earn it?”

They keep trying to figure him out, but they’re losing the game: real or not real?

The bread they keep asking after is the bread that fills their stomachs, but they keep getting hungry again. They keep needing more, and more, and more. You can’t blame a human for getting hungry, but you get the feeling that these aren’t starving people so much as people who think they might be onto something: that they’ve discovered a guy who can feed everyone. That’s worth something, you know. Not unlike conspiracy theorists, they hope they’ve been the first to find a solution to all their country’s problems. They live in an occupied land, but people who can control the supply of food will soon be free people.

No wonder they wanted to make him king by force.

Jesus isn’t interested in being in power. Being in power is temporary. As George R.R. Martin told us of the struggle for power: “in the game of thrones, you win or you die.” And as we learned through seven seasons of Game of Thrones: everyone who plays the game dies.

Real or not real?

This is real: community. Love. Ancient ritual. Grace. Mercy. Seeing another person as human. Hope for the future.

Love and truth do not run out.

Hearing this, the crowd finally says, “Give us this bread always.” Jesus responds, “I am the bread of life.” Truth and love and community and identity cannot be bought and sold or hoarded or scarce. You cannot run out of these things.

Neither can you run out of God.

At first, Katniss only knew Peeta as “the boy with the bread.”

The bread that Peeta threw to Katniss when she was hungry was temporary, but the bond that it created between them was not. That’s how kindness works. That’s how love works. They do not run out.

The Boy with the Bread nourished Katniss with bread when she was starving, and years later, she will nourish his tortured mind with truth, answering the question that we answer for each other whenever we need it: real or not real?

Truth does not run out.
Real: you are loved. You are welcome. Wherever we gather in love, Christ gathers with us. The Bread of Life is here. The work of God is God’s work, not ours.

Real or not real?