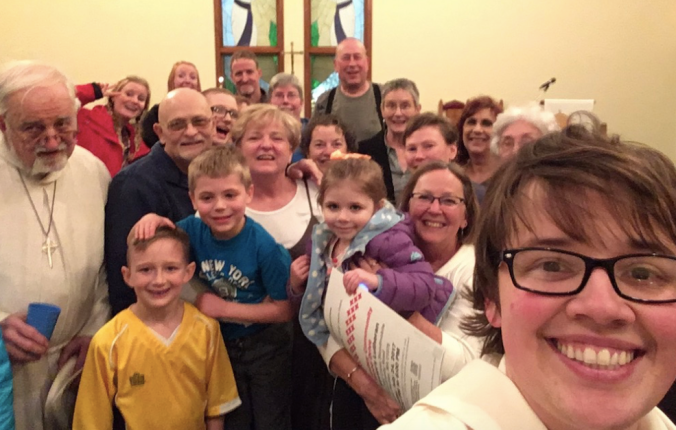 “So [the women] went out and fled from the tomb, for terror and amazement had seized them; and they said nothing to anyone, for they were afraid.”

Well, clearly word got out somehow, as my clergy friend remarked this week.

These women have been through it. They’ve watched their beloved teacher die, and while the male disciples are hiding in a locked room out of fear that they will be the next to be crucified, these women venture out to care for Jesus’ body. Sometimes it’s not the “holiest ones” who get it best, like the disciples — it’s the ones you wouldn’t expect. It’s the ones that have been through it.

The band the Hold Steady has a song that keeps getting quoted at these Easter Sunday things these days. Select lyrics:

“Her parents named her Hallelujah, the kids all called her Holly.
If she scared you then she’s sorry…
The priest just kinda laughed, the deacon caught a draft
[When] she crashed into the Easter mass with her hair done up in broken glass
She was limping left on broken heels when she said,
Father can I tell your congregation how a resurrection really feels?”

Episcopal priest Barbara Brown Taylor put it another way: “When life is pretty good and church is pleasant enough, who needs resurrection?”

Nah, the people who need resurrection are the ones who’ve been though it. Which to varying degrees includes all of you, in some way, from the littlest one to the oldest. We’ve all got fears and hurts and pains. We’ve all been through it.

The biggest point of Easter is the one that nobody needs to spend a lot of time on: death and pain and fear are real. Financial trouble and mental illness and physical illness and marital problems and job loss and existential crises every time you flip on the news are real. You’ve been through some stuff, and so have I.

So let’s talk about how resurrection really feels.

I myself shouldn’t still be a church person for any number of reasons, most of them having to do with me. I probably shouldn’t be talking to you right now as the preacher on Easter Sunday — statistically, I mean. This is true for a lot of reasons, most of which you can tell just by looking at me. People like me aren’t allowed to preach in most Christian traditions, and even more people like me leave the church in droves every year.

This place — these people, you — give me hope. This is the kind of place where you come after a really awful day and find people you aren’t related to who genuinely care about you. This is the kind of place where we accompany each other, in life and in death. This Holy Week, as many of you know, we lost one of our own here. His name was Bruce, and we loved him and love him still. He was a beloved husband, father, grandfather, and great-grandfather and a retired pastor who had served and told and believed in this story of resurrection for well over fifty years. This week, I watched and helped as this community gathered around his family in the middle of Holy Week, brought them meals, helped plan his funeral service, and even constructed a casket by hand, so that even in death, Bruce was surrounded by the love and care of his church.

And that wasn’t all we did this week. We also planned and executed three Holy Week services, and stayed late into the night last night cleaning up.

That tells me that this isn’t just the kind of place where you celebrate Easter because this is the day the calendar told us to do it. This is the kind of place where you actually believe this stuff, and it’s in your bones in such a way that you can’t help but have your life changed by it. We’re missing a common story these days. We don’t live in the same realities as our neighbors. We don’t all have the same take on whether every part of the whole thing factually happened – ok – but that Christ is risen indeed is a thing that is TRUE because SOMETHING happened here. Word got out about SOMETHING.

And yes, you can be cynical about it. Most of us can be. I’ve been around some people who never doubt, but I find at least usually that I’m most comfortable with people who have at least considered the possibility that maybe Jesus’ followers just made the whole thing up.

But watching you all and being in community with you all makes me realize that, maybe even in spite of ourselves, we really do believe this stuff. That our view on unknowable facts like whether this or that happened can shift and change but what we know is that this stuff is TRUE.

And then weird things start to happen. Republicans and Democrats start to hold each other’s kids. People who would otherwise not care to share space with one another start to do life together, and it isn’t all kum ba yah, but it’s happening. And maybe – just maybe, society starts to mend, even if only in one corner of our tiny fellowship hall in South Hadley, Massachusetts.

This is the kind of place where you find yourself doing something sort of silly and fun on the way to telling some ancient first century story but when you all do it together from the oldest to the youngest, it really starts to take on some real meaning and suddenly, despite what you’re facing down in life, you find yourself having actual hope.
So you came to hear and celebrate the story. Whether you came out of habit because you always come here or because you didn’t have anywhere else to go or for whatever reason, you came to hear the story. So if you’ve been through it, if you know how resurrection really feels, this is your chance to help me tell the story.

And so, adults, children, youth, everybody — this is where you come in. This is the only way I know to fully tell this story, and I need your help.

St. John Chrysostom lived in about the 300s and was considered one of the greatest preachers of the early church. His Easter homily is still a feature in churches around the world as a tradition arose around it: stomping out death. And so, before we go to the table for the actual Easter mass, you are invited into the ancient tradition of stomping out death. In the early church, after the long Lenten fast and the observation of Holy Week and the Great Three Days, it was a tradition to read St. John’s Easter homily at the Easter celebration and for the whole congregation to stomp their feet at every mention of the word “death,” symbolizing how death has been defeated and put under our feet. How those who have been through it — which is everybody — are vindicated through resurrection.

I’ll be preaching John’s short and rousing Easter homily in celebration, and then I will sit down. You, for your part, are welcome to listen, enjoy, and stamp your feet in victory whenever you hear the word “death.” If you’ve been through it or if you’re going through it, may you find hope in the joyful thunder of this place.
So let’s try it: “death.” Good.

First and last alike, receive your reward. Rich and poor, rejoice together!
Conscientious and lazy, celebrate the day!
You who have kept the fast, and you who have not, rejoice this day, for the table is bountifully spread!
The calf is a fat one — let us feast like royalty!
Let no one go away hungry. Partake, all, of the banquet of faith.
Enjoy the bounty of God’s goodness!
Let no one grieve being powerless, for God’s universal reign has been revealed.

Let no one lament their constant failings, for forgiveness has risen from the grave.
Let no one fear death, for the death of our Savior has set us free.

Death took what it saw, and was overcome by what it could not see.

One thought on “Who Needs Resurrection?”