Baptisms, like weddings, are days when we want everything to go right, but because there are babies and pastors and general chaos, nothing ever quite goes perfectly. But of course, few things in our lives ever go perfectly.

Mistakes are a part of all our lives, and I think we’d all agree that we don’t need help making them. But those of us who use smart phones have one huge helper in mistake making: autocorrect.

To those of you who don’t use smartphones and don’t deal with it: blessed are you. This is one sermon illustration that it’s okay that you don’t fully understand.

But for you unfortunate majority like me, you know the struggle of autocorrect.

Or, say, you’re a new pastor at a church and you need to submit a motion to council about something or other, and your council president texts you and instead helpfully reminds you to submit your moron to council. True story.

Sometimes, autocorrect mistakes are hilarious and other times they run the full range of embarrassment from chagrin to full on humiliation.

But autocorrect is just the hip young cousin of its old friend the typo, who humiliated us way back when the thought of a telephone being a camera and a compass and a workout partner was absurd.

Typos really get to us, or at least to me. They really dig at my need to be perfect. If it tells you anything, I so obsessively fix typos in my sermon manuscripts that I even fix the parts that I know I won’t be reading. Worse than that, I fix mistakes in italics and underlining. Can you tell that I italicized that?

Typos humble us and make us face directly up to our own needs to be perfect.

English teacher and slam poet Taylor Mali has one poem singing the praises of typos. It’s called “The The Impotence of Proofreading.” And it starts like this:

“Has this ever happened to you?
You work very horde on a paper for English clash
But you end up with a a very glow raid (like a D or even a D=)
and all because you are the word-1s liverwurst spoiler.
Proofreading your peppers is a matter of the the utmost impotence.
This is a problem that affects manly, manly students all over the world.
…I myself was such a bed spiller once upon a term
in my sophomoric year, that I knew I needed to improvement
or gone would be my dream of going to Harvard or Prison
(you know, in Prison, New Jersey).” (1)

Believe me, I would love to perform the whole poem for you, but you’re just gonna have to go find the rest of it yourself.

But one of my own teachers showed it to us while I was in grad school and I realized how spectacularly funny these mistakes were. I began to look at typos — pure failures in typing, are.

And I started looking at other failures a little differently, too.

Things do not usually go as they should. Arguably, they don’t most of the time.

Today’s Gospel is a little story about a master who went away and left his servants with money. Two of them invest it, and one goes the safe way and just buries it, because his master is a scary guy. (Some of you will remember from our previous conversations that the way that parables work is that sometimes we’re told who’s who, and sometimes we’re not. We assume the master in every story is God, but usually Jesus doesn’t say that.) Jesus is trying to get at a little kernel of truth about life with God, yes. But like the book of Esther, it doesn’t mean God actually has a direct cameo in the story.

Anyhow, this guy who buries his talent — I’ve always thought that guy got a bad rap. Probably because it’s very likely that if I were him, I’d’ve done the same thing. A lot of us would. Especially if you know that the person who gave you money is a harsh guy, you’d be afraid of making a mistake.

It’s the rare person who dares to go all in, to risk everything. Because failures usually aren’t as funny as typos, especially when you’re dealing with a harsh boss.

So what’s Jesus saying to the Church today?

I think it’s pretty simple: it’s okay to fail, because failing means you’re doing something. And we need to come to peace with the fact that things don’t always go as they should.

We rage against autocorrect because it so often makes us look silly. But if autocorrect never made us look dumb, it’d mean that we weren’t typing anything — no messages of love, no “see you there,” no “I was just stinking of you.”

The price we pay for doing things — and for living and loving — is sometimes messing up and trusting others to have grace. It’s things going wrong that are beyond our control; it’s loving people and then losing them.

This is true of parenting, and grandparenting, and teaching. As we baptize these two boys today, their parents will make a lot of promises. I always tell parents that these promises can seem daunting, and most people are immediately afraid that they’ll mess them up. But, just like my own mentor always does, I add that you’ll notice that the support system comes out right in the liturgy, immediately. The sponsors make promises to help. And then the congregation, that’s been surrounding the whole family the whole time, comes right alongside.

Today, we all make promises to God and to Otto and Luca.

Yesterday, we laid to rest our dear brother Howie. As I told the people gathered in Rhode Island yesterday, in preparation for that service and this one, I downloaded several images to my computer that could serve as header images. It wasn’t until relatively late in the week that I discovered that I’d used the same image for both. 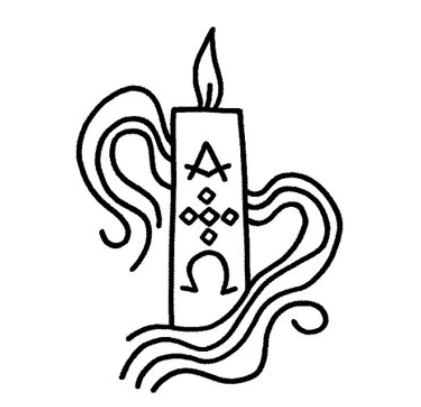 It’s the paschal candle. It’s the candle we light at every baptism, every funeral, and every Sunday of Easter. It’s the one we light at Easter vigil as we remember the night that Christ rose from the grave. And it’s there to remind us that though things don’t always go as they should, in funny ways and terrible ways, in ways within our control and far beyond it, the worst thing is never the last thing. That though we still deal with terrible pain and grief and sometimes mistakes and guilt, love always rises from the grave.

We lit that candle at Howie’s funeral, and we light it today to celebrate Otto and Luca’s baptism. And because of that, I can’t help feeling like today, Howie is with us.

Though we deal with mistakes, death, and pain today, we also celebrate, because Love has risen from the grave. The worst thing is never the last thing: not our mistakes, not even death itself. Love always wins.

Things will not always go as they should for Otto and Luca. They will mess up, we will mess up, and things beyond all of our control will go wrong.

We may not all be there, but we, the church of Jesus Christ, will be there, always, in some form, and in some way, just as the memory of Howie is  with us today, we will all be there.

Today, we declare that this, the Church, is their home.

This is why we exist: to be a home to everyone. To preach hope. To love with open arms. Because, as we say at Beer & Hymns, we believe that’s how Jesus rolled, and we want to be like him.

Being Church, of course, is full of struggle and full of mistakes and full of tragedies beyond our control. We all face hardship. But we continue to dare boldly and love anyway.

We all make mistakes. But where there is love, there is grace.

Otto and Luca, welcome home. We’re not perfect, but we are loved. And we’re here to remind you as the years go by, that no matter what, you are loved, too.

And may at least some of your mistakes be funny.

So, as I accidentally texted a friend this week: let’s get the water and do this ballgame. Amen.

1. You can listen to Taylor Mali’s entire poem here. (Some content may be inappropriate for children.)

One thought on “Baptism and Autocorrect”