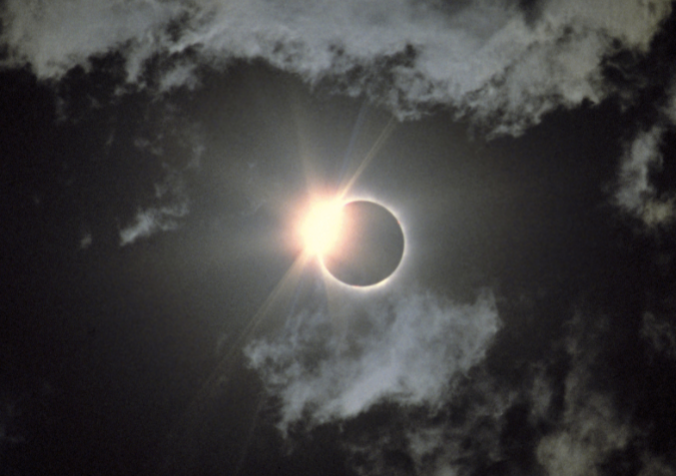 My day on Monday started like just about any other: get up, breakfast, meeting, phone call with our music director to plan some hymns, then getting the worship info out to our admin for the bulletin, and finally tying up a few other logistical odds and ends. Then, at about 2PM, I looked at the clock with a start — it was time to go.

Monday, as you might recall, was eclipse day, and I had plans: watch from a mountain.

I made it to the trailhead up Mt. Holyoke and peered through the trees at the sun through my super cool eclipse glasses. The sun was already starting to disappear.
I made the short, steep hike up to the top of the mountain and caught my breath while I looked at the representation of the Pioneer Valley who had come out to watch the solar eclipse with me on top of the mountain: along with the usual outdoorsy-looking hikers and the summer-loving barbecuers, there was a ridiculously wholesome, diverse group of schoolchildren and their cheerful, chaco-wearing, snack-wielding chaperones; a lady with a flowy skirt and a straw hat who definitely lives in Northampton who had hiked the mountain in flip-flops; two college guys debating politics, and finally, a grumpy farmer who had been dragged there by his family.

From now on, if I ever need to explain where I live to out-of-towners, I’ll just explain that scene. As the sun became 65% hidden, casting a shadow over the river and farmland below, this place that I’ve found myself was revealing itself just a little more, too.

These days, we plan for months to observe solar eclipses, but obviously, the first recorded solar eclipses were quite a shock to humanity. As with other phenomena in the stars, humans had no way of completely observing or explaining what was happening in the sky, so they came up with their own theories: one was that a dragon was eating the sun. So the people would sacrifice animals, sometimes even humans, to try to get the dragon to leave them.

And as one of the documentaries that I watched this week said, it worked every time.

The Greek historian Herodotus tells us about when the path of totality crossed a battlefield as the Medes and the Lydians fought a long-standing war. When the sky became dark, the soldiers immediately stopped fighting, and their leaders took the eclipse as a sign that they should agree to a truce. It’s called the Eclipse of Thales, named after the philosopher who is said to have predicted it ahead of time, which is only sad for the guys who died in the battle before the eclipse. That battle, eclipse, and truce occurred on May 28, 585 BCE, and we know the exact date because science.

Eclipses are much less of a mystery to us now. We now know that there is no dragon in the sky, and though we may have toyed with the idea of human sacrifice when certain people annoy us, we don’t go through with it anymore. We can predict the exact dates and times of every eclipse, so it’s much less of a shock to us than it used to me. In fact, I chuckled a bit to myself when I realized how excited I was getting about something as simple as the moon getting in the way of the sun for a few minutes.

But a total solar eclipse is still a big deal, and science has made it more possible for more people to witness one. In fact, April 2024 is set to be a great time for us to head over to Maine, Vermont, or northern New York to see totality ourselves. This time, people streamed from all over the country to get into the “path of totality,” where the moon completely obscures the sun, the birds stop chirping, the land goes dark, and all you can see of the sun is the corona, the dazzling light of the sun’s plasma or “atmosphere” that is usually invisible to us.

People of all faiths and none describe it as a deep spiritual experience, and on Monday, the whole country stopped bickering about everything for just a few minutes to witness the cosmos putting on a show.

And then, just like that, life restarted again, or as a boy on Mt. Holyoke near me said, “So now it just goes back to being the sun again, right?”

In our Gospel reading today, Jesus has come a little ways since having healed the Canaanite woman’s daughter last week. In between that passage and this one, he’s fed four thousand men plus women and children and had plenty of leftovers, and right after that, he’s bickered with the Pharisees and other religious authorities about showing them a sign that he’s really sent from God. Of course, he had just given them a sign — he’d just fed a huge crowd of people out of nothing. No sense of irony, those Pharisees.

Then, after that, even his disciples are being slow with him. It’s one of those times when Jesus must’ve felt like nobody got it, nobody understood, or as my biblical scholar friends described Jesus in Matthew and Mark — “dejected teenage Jesus: no one understands him.”

Finally, he up and asks his disciples, “Hey, who do people out there say that I am?” I think he starts with the crowds rather than the disciples because he knows it’ll be easier for them to talk about other people’s feelings and assumptions rather than their own.

The reply comes, “Well, some say John the Baptist” — which could be a case of mistaken identity or it could be a case of “he’s back from the dead,” depending on whether they’d heard the new that John had been killed. These were the days before we could just google “prophet/messiah figures near me.” But then there are also other, definitely “they think you’re back from the dead cases: “some say Elijah, others say Jeremiah or one of the prophets” (v. 14).

A man who up to that point has been called Simon steps up and delivers: “You’re the Messiah, the son of the Living God.”

And just like that, something extraordinary has happened and something hidden has been revealed. They finally said it. You know those moments when you know something is true, but then when you hear yourself say it, it becomes real for you? I imagine this is what that was like for Peter. All of a sudden, things shift dramatically and you can see things in a way you never have before. Peter finds himself in a kind of path of totality, where everything has shifted. In a few minutes, everything will be back to normal and Jesus will quickly tell them not to tell anyone that he’s the messiah.

But for a few shining moments, everything shifts and Simon even gets a new name: “Blessed are you, Simon Son of Jonah! …I tell you, you are Peter, and on this rock I will build my church, and all of hell won’t be able to touch it.”

Our Old Testament reading is from Isaiah, and it also references both rocks and acknowledging the obvious: God calls Israel to remember the rock from which they had been hewn.

Remember what you’re made of. Remember who you are. Remember that God has brought you this far.

I think that’s something we could all do a little more of these days as we press towards busy times and ever trying times. We are the heirs of Peter, and all those who built the church. The church’s history is not a clean one — the church has done plenty of evil in Christ’s name to all kinds of people. But every now and then, we find ourselves in a kind of path of totality. Every now and then, we see clearly not only who God is — a self-giving God of love, patience, and welcome — but who we are and who we are meant to be: self-giving people of love, patience, and welcome.

“Remember the rock out of which you have been hewn.”

Remember where you came from; remember who you are and whose you are.

We have from God and we are going to God, and this morning, God says:

“Who do you say that I am?”
Consider that question for yourself, because it will shape who you will be, and who we will be together.

Who does this church say that Jesus is? I’ll tell you what I’ve observed in the year and nearly nine months I’ve been with you.

This is how Jesus shines through you. This is how you show that the rock from which you’ve been hewn is the rock of Jesus Christ: God of the universe, lover of humanity, and presence at our table every week. And when we can see that, we can see ourselves more clearly, too.

Solar eclipses shake up a lot within us: they make us see how very tiny we are, in the midst of it all. They help us to understand something about ourselves. They provide those rare moments of clarity when we can see things that we usually can’t — both literally and metaphorically. They stop everything — all the bickering, even all the suffering, just for a few moments.

They help us, for once, to look up and see the same thing.

This morning, when we come to the table, we are in a kind of path of totality. All the bickering and the suffering can stop for just a few minutes as we all gather around Christ, who may be the only one we have in common but really, that’s the only thing that matters. We can build from that.

So let’s go to the table, and no matter what you see every day, whether in your life circumstances or on the news, let us come with joy and finally, in this moment, look up and see the same thing: peace, grace, and the path of totality — total, complete, and all-encompassing love. Amen.