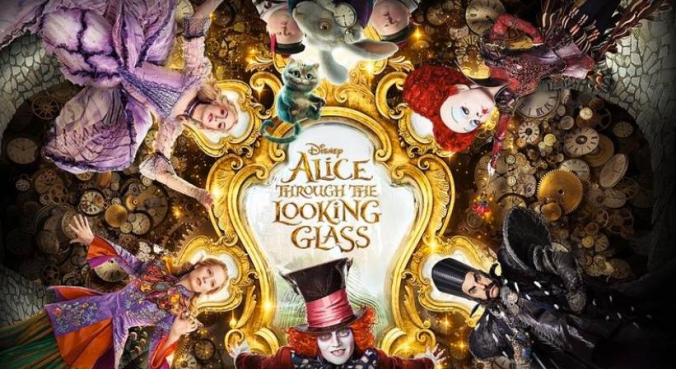 I remember noticing very early on in my life how quickly things can turn upside down.

How quickly your football team’s situation can change — like how fast our Auburn Tigers could go from being Alabama’s ugly stepsister to a national contender. Or you know, how another football team could go from having its star quarterback suspended to playing in the Super Bowl.

I also remember noticing how fast someone’s emotions could change based on new information.

I remember noticing quick and radical change early in my life. I came to expect the unexpected. That, along with some of my parents’ choices in what movies and literature to expose me to, including Bible stories, led me to embrace absurdity as just another form of quick and radical change. One of my favorite movies became Alice in Wonderland, starting a lifelong fascination with the works of Lewis Carroll, which I also talked about two weeks ago. Well, that sermon started me on a kick to renew my childhood passion, and I spent a night this week re-watching Alice Through the Looking Glass, the 2016 movie that was only sort of successful.

These days, we call things absurd if they’re bad, but I remember, very early on, accepting absurdity not as bad, but as neutral, even sometimes chaotically good. Think “Cheshire Cat” — appearing, disappearing, saying vaguely helpful things along with what sounds like complete nonsense. The Cheshire Cat became not only my spirit animal, but my impression of the Holy Spirit.

It also occurred to me early on that I thought Jesus was absurd — in a good way — and that’s what drew me to him. Crazy ideas, crazy stories, like water being turned into wine — the best wine at the wedding at the end of the party. Like Jesus feeding 5,000 dudes and their accompanying women and children with just a couple of loaves and some fish. Like Jesus appearing to us through the ages in bread and wine, body and blood. The absurd claim that in infinite God became an infant, just like all of us once were, and walked and talked on Earth among us. The idea that loving your enemies rather than fearing them is a way to live rather than a fast way to die. The insane idea that even the destruction of a body isn’t the end of it, because this community that we’re connected to witnessed Jesus dying and rising.

All religion deals in absurdities, but sometimes I feel like Jesus almost abuses the privilege. But then, you’re talking to someone who imagines the Holy Spirit as often operating a lot like the Cheshire Cat: showing up singing, telling you to do something absurd, like go to seminary or lead that committee or care for those children or befriend that person.

Even today, in our Gospel passage, Jesus is dealing in absurdities.

“You are the salt of the earth,” he says. But then he says that salt that loses its taste is worthless.

Much has been said of polls these days, but I want a count of how many preachers this week googled “Can salt lose its saltiness.” I know of at least one.

No. It can’t. Turns out that sodium chloride is incredibly stable.

“You are the light of the world,” Jesus continues. “A city that’s built on a hill cannot be hid.”

I immediately imagine folks running around trying to cover their city in a giant tablecloth to hide from an advancing army. Absurd.

Jesus continues, “No one after lighting a lamp puts it under a bushel basket.” Well… no. Lutheran scholar David Lose points out that besides being counterproductive, 10/10 fire marshals agree that putting a fire under a bushel basket runs a high chance of catching your house on fire.

Then, after these absurdities, Jesus says that he has not come to abolish but to fulfill the law, ending with the rather alarming statement that unless our righteousness exceeds that of the scribes and Pharisees we cannot enter the kingdom of heaven.

Then I hear the Cheshire Cat-like Holy Spirit giggle and ask me if I’ve considered that maybe the scribe and Pharisee righteousness bar is low….?

We love to run around talking about hidden lights and unsalty salt, both as a call to action and as an accusation for other churches. But maybe we’re missing the joke. Maybe this whole salt and light and righteousness thing isn’t about what we do, but about who we are.

The film based on a book that I watched the other night, Alice Through the Looking Glass, is in itself about reclaiming one’s identity. Alice in this story has come back from Wonderland and grown up to be a ship’s captain, adventurous and daring, not believing that anything is impossible. However, a series of unfortunate events befall her, and she finds herself extremely financially limited, in danger of losing parts of her deceased father’s estate. She flashes back to words from her childhood: “…sometimes I’ve believed as many as six impossible things before breakfast.”

The movie will go on to be about Alice reclaiming the absurd side of herself, the side willing to believe as many as six impossible things before breakfast. When her friend the Mad Hatter explains a grave problem to her, Alice initially doesn’t believe him, telling him that what he believes is impossible. The Hatter’s eyes go wide and he promptly throws Alice out of his house, saying “You’re not you!”

“My Alice would believe me!” he says.

Of course, it’s only in believing the impossible, the absurd, that she rediscovers who she really is and saves the day in the process.

And I started thinking that maybe that’s what this whole salt and light and fulfilling the law thing is all about: remembering who we are, and in doing so, believing the impossible: that we are a community bound together by this crazy story and this crazy hope.

Last Sunday, we sang “We Are Called,” and this week, we sang “Gather Us In,” both songs from my ordination and my installation service here, both anthems of our beginning together. I was ordained a year ago last Tuesday after a long struggle with the universal Church over who I was and what I could do. And that struggle finally ended with my ordination and my call here, opening up a new chapter for me and for us together. And so, since it’s been a year, I thought I should reflect on it, because that’s what spiritual leaders do.

A year of being ordained. Of being salt. Of being light. Of being the least in the kingdom, or is it the greatest, or are we all stuck somewhere in the middle? In this wonderland of faith I can rarely remember, other than remembering that position in line isn’t important.

An outside force is needed if anything is to happen to light’s brightness or salt’s saltiness or our righteousness. One like the Holy Spirit that falls on the unordained and the ordained. One that helps us believe six impossible things before breakfast.

We’ve become reconciling. We’ve explored new possibilities. We’ve given the Church, and each other, a chance, just one more time.

Now, I think I know myself pretty well. And I’m getting to know you day by day. We don’t continue to show up and do these things because we’re any different than anyone else.

We’re no superheroes; we all put our albs on one arm at a time.

We do this stuff because somehow, maybe in an instant or maybe over time, it’s become what and who we are.

And yes, we’re always free to forget who and whose and what we are. We will fail. We will forget. We will think things are impossible and we won’t believe. Every now and then we might look at each other with all the alarm of the Hatter and exclaim “YOU’RE NOT YOU!”

But we are. We are salt. We are light. We are righteous. We are, together.
Thanks be to God who made us so.

We believe no fewer than six impossible things before coffee hour every Sunday because we’re a bunch of absurd people brought together by the Holy Spirit and somehow, together, we really believe this stuff. Because when you can’t believe, I believe for you, and vice versa. Because somehow, this is who we turned out to be, like Peter and Andrew by the seashore: the kinds of people who leave nets behind and show up and keep showing up.

We might wonder, along with the Mad Hatter at times, “Have I gone mad?”

But may we hear the Holy Spirit’s words in Alice’s response:

“I’m afraid so,” said Alice. “You’re entirely bonkers. But let me tell you a secret: all the best people usually are.”