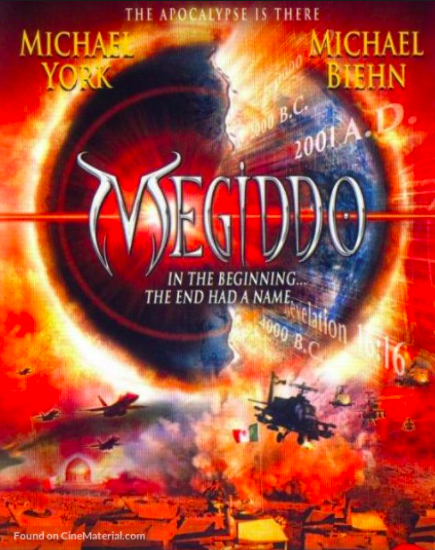 As a teenager, apocalyptic movies were my thing.

I don’t know about you all, but one of my most frequently uttered phrases in desperation is a very simple one: I’m not ready.

I’ve always worried about not being ready, and it gets worse this time of year.

I’m not ready for Christmas.

I’m not ready for Advent.

I’m not ready to drive to Alabama for Thanksgiving.

I am most certainly not ready for Black Friday.

Today we celebrate Christ the King or Reign of Christ Sunday. It’s the last Sunday of the liturgical year, when we imagine what it might be like for Christ to return and make all things right. Truth be told, we have no idea exactly what that looks like.

When I was a kid growing up Southern Baptist, we were, as you might imagine, obsessed with Christ’s return. I, for one, was particularly obsessed with it. It was like a “get out of death free card.”

The one thing that worried me about it is that I would not be ready. The signs — literal signs — and t-shirts, and bumper stickers — were everywhere: get ready, Jesus is coming back!

I really should talk to my therapist about how this affects my Christmas, Advent, and vacation preparation. Anyhow.

Imagine eight year old Anna sitting on her parents’ back porch in Alabama thinking, “What if he comes back now. Or now. Or now.”

I would repent of my sin constantly, asking Jesus into my heart constantly, you know, just in case. Fire insurance, if you will. If the rapture was coming, the last thing I wanted to be was left behind. Speaking of Left Behind, I read all of those books and saw all of the movies, though I much preferred the movie Megiddo, a lesser-known Christian apocalyptic movie that I swore was better than Left Behind. I was an evangelical hipster from a very young age. By the time I was a teenager, I was a scholar of bad theologies about the end of the world, only I didn’t know they were bad yet.

I would watch the news and take notes, ready for everything to fall apart, proving that Jesus was coming back soon. I was constantly ready for disaster.

Today’s Gospel text is an interesting one when you consider that this is the day when we celebrate Christ in glory. I mean, really — the Crucifixion text? Talk about everything falling apart. The disciples were the most unready people that have ever been unready in the history of unreadiness. We look back through the Gospels and we wink at ourselves knowingly as Jesus foretells his death and resurrection over and over, but the disciples don’t get it. And really — can we blame them? It’s not like foretelling one’s death, let alone one’s resurrection, are common occurrences in the world.

Peter denied Jesus. The others ran away, frightened that they were about to get crosses and deaths of their own. They were so not ready, much like we’re never really ready for tragedy, for things to fall apart.

2016 has been a year that a lot of things have fallen apart for a lot of people. We have watched as the crisis in Syria gets worse. We have come through a horrendously divisive and painful campaign season. We have seen shootings happen all over the place, most notably in Orlando. David Bowie died. Prince died. Leonard Cohen died. So many others died. And the list goes on. Zika. Brexit. More terror attacks. Drought. Record hot temperatures.

A simple Google search of “2016” reveals that the world wasn’t ready for it: “2016: Worst year in history?” reads a Slate article. Of course, any of us who have lived longer than a few years or who have a decent grasp of history know that this year wasn’t the worst, due to its lack of world wars and bubonic plagues, among other things. But it’s safe to say that this hasn’t been a great year, and a lot of folks were not ready for that.

This week, I went to our Bishop’s Convocation on the Cape. Bishop Jim himself preached at the closing worship service and talked about the pain and strife that we face in the world and in our congregations. He talked about the way people look into the face of their pain and their fear and they look at the circumstances in the world and ask a very relevant question: “Where is God?”

And he said that because of the cross, we, as Christians, and especially as Lutherans, have the gall to look that pain full in the face and point right into the center of it and say “Right there. God is right there.” God, in this Gospel text, has stepped right down into human pain and tragedy. This God is not some far off being who stays well away from human pain. Instead, he chooses, willingly, to take it on, to come walk among us and not only see suffering, but to live it.

When I was a kid I thought I had to be ready to meet God face to face. When I grew up, I came to realize that I already had: I had already met God in my pain.

When I was in college, I was a part of the Wesley Foundation, a United Methodist campus ministry. We were in Alabama, and we were considerably more progressive and a little less evangelical than many of the other church bodies both around campus and off campus. One night, we were all attending a Eucharist service together. It makes me chuckle to think about what we all grew up to be: there were about eight of us students, and five of us would, within ten years, become two Episcopal priests, a Methodist pastor, a Lutheran pastor, and a therapist.

We sat in the service after the elements had been blessed and listened to this local United Methodist pastor give the invitation to the table. He said, “Now I want you to sit there until you’re ready to meet God. I want you to be sure that you’re ready to come and receive his body and blood. When you are ready, we will be here.”

Sit there until you’re ready.

Now, there are moments in the life of a pastor when her people make her really, really proud, because you can tell they’ve been listening to you. This was one of those moments for my campus minister. We all heard this call to sit there and make ourselves ready, glanced at each other skeptically in the silence, and then, one by one, starting, shockingly, with one of the future Episcopal priests, got up and went forward to take the Eucharist. It wasn’t about making ourselves ready. Christ had already made us ready.

Only later, after I became a Lutheran, would words from our own tradition give me the words I needed to explain myself here: “Fasting and bodily preparation is, indeed, a fine outward training; but he is truly worthy and well prepared who has faith in these words: Given, and shed for you.” (1)

During our Advent supper churches, we will be looking at suffering and tragedy and how to walk with others through it. We will discover God in the darkest times, and see how the bishop’s, and Martin Luther’s, words ring true: that when we ask where God is in tragedy, the answer is “Right there.”

So come to this table, you who have great faith, and you who would like to have more.

This church, and Christianity, are filled with people who were never ready, but we serve a God who is always present. So come on in, child, and have a seat. You are welcome. Ready or not. Amen.